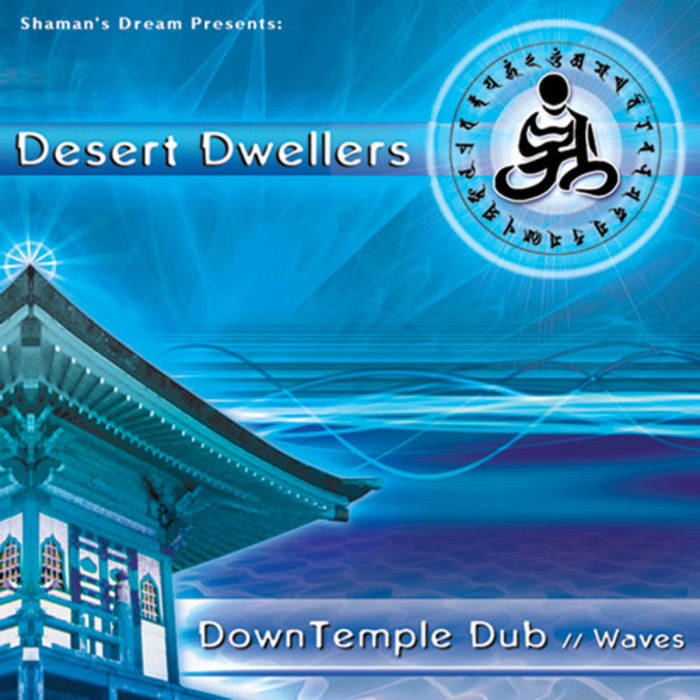 Calicofrost Truly one of my favorite albums to meditate/do yoga to. Favorite track: Bodhi Mandala.

On their classic psy-dub and yoga album DownTemple Dub: Waves, Desert Dwellers meld elements of downtempo and chill-out with sinewy basslines, otherworldly guitar and an exotic mix of organic vocals instruments into an Indo-ambient mystical fusion. Pulsing with lush rhythms and serene harmonies, DownTemple Dub: Waves is a sonic odyssey into the soul of the global heartbeat. This 2006 release on White Swan features vocals from Sarah West, Ehru and Violin from Martin St. Pierre, Bansuri Flute from Dominic Dean Breaux, Cello from Michael Kott, and was produced by Amani Friend, Rara Avis, and Craig Kohland from Shaman's Dream.

Both DownTemple Dub: Waves & Flames are the musical score to Duncan Wong’s Yoga DVD project, Awakening. Duncan's inspirational practice and love of electronically infused devotional music, along with producer James Wvinner's forward thinking vision of how to set the look and sound of the project, allowed us to push the bounds of Yoga music into a new realm of musical fusion--into something we call Yoga Dub: electronic devotional music blending the boundaries of downtempo, ambient, psy-chill and dub, while incorporating such traditional instruments as subahar, tabla, udu, erhu, cello and voice. The emphasis is always on the space between the music, allowing for a non-intrusive soundscape to support rather than distract from the listener’s activity.

With the social and economic explosion that yoga has caused in America, it is rather surprising that an industry that has become as much lifestyle as practice - with a virtual flooding of yogic clothing, nutrition, DVDs and supplies - has not properly tapped into the music market. This is not to say there have not been attempts, but outside of someone like Krishna Das, who is performing a minor, and appreciated, tweaking of an old art form (kirtan), little is evolving the scene.  Hence the disastrous calamity known as "lounge" music meshing with sitars, tablas and high-pitched Indian women (or bluesy, over-emotional Westerners) singing about this god or that. Now, devotion is a personal affair, and this brand of bhakti yoga is more than acceptable on an individual level. ("If you can speak, you can sing...") But we're talking about producing records, and in that case it's easy to see why the culture within the culture is wearing blinders. The goddess may have many arms, but those arms are distinct and used for specific reasons, and if not developed properly the entire body will not become fit.  For many years, as a yoga instructor and music journalist, I've searched for complete albums that accomplish this task. I'll find a song here, a couple there, music that works on many levels: in the headphones, in the midst of a Vinyasa yoga class, and just for general chilling. I knew the possibility existed, but every time I came across something promising there was always some element carrying it into the unforgivable terrain of "New Age." While men like Krishna Das and Benjy Wertheimer have been making consistently amazing acoustic music, I wanted something with bass, endowed with a bottom end that would lay foundations for what an electronic yoga would entail.  Then I received these two discs.  The single most important aspect of these discs, the very reason they're successful (and in reality the underlying brilliance of the yoga system), is their ability to play between light and shadow. On a sonic level, that's maintaining a serious low-end and groove while tastefully incorporating elements such as flutes, synths and vocals. And many of the vocals they've chosen are not new - they're available on mass-produced sampler discs, already tinkered with by producers such as Bob Holroyd and Ott. That does not detract from the integrity of the music, for like anything in life, it's how it's used. So when the deep, gravelly tones of "Om Namo Bhagavate" reminds one, in tone, of Cheb I Sabbah's "Radha Vindalu" - a darker, deeper electronica - you're pulled into a devotional music that does not rely on the notion of goodness alone, for it is well known that to introduce goodness, evil tags along. It is balance that is yoga, and is their music.  And there are just simple moments of heartbreaking clarity. "Misty Mountain" is a gorgeous song, regardless of exterior affiliation. "Temple Dragon" has a nostalgic edge, a soundtrackish quality that blends in shades of reggae. (As does, obviously, though at a slower BPM, "Yoga Dub Mystic.") And this trio of artists (Amani Friend, Rara Avis, and Treavor Moontribe) even craft a midtempo dancefloor cut amidst the slower-paced, reflective songs, with "Tala Odyssey." Whether warming up for a dance, or sedated by a Savasana-ready "Lotus Heart," you're in dexterous, well-crafted hands.  Through the development of our numerous senses, a certain dexterity is accomplished. Some train their mind and muscles for specific tasks, such as meditation, or chanting, or the study of scripture. There is no one "proper" path in the yogic system. Yet to develop flexibility is to become in control of innumerable possibilities. Desert Dwellers has tapped into the technological twilight of modern times and melded it beautifully with the knowledge and rhythms of an ancestral Indian way of being. With the massive social exploration of this art form and philosophical undertaking occurring within the borders of a growing, borderless world, to hear an evolutionary take on an old music is refreshing, and to be enjoyed over and again.